Source: BBC News
Congress leader Sajjan Kumar has been accused of “inciting” anti-Sikh riots [Genocide] in 1984 India’s top investigating agency has accused a senior Congress Party leader of being involved in a conspiracy of “terrifying proportion” with the police during anti-Sikh riots in 1984.
The Central Bureau of Investigation (CBI) told a Delhi court that Sajjan Kumar incited crowds to kill Sikhs. More than 3,000 Sikhs were killed in 1984 after the assassination of Prime Minister Indira Gandhi.

Mr Kumar and five others on trial with him have denied all the charges.

‘Not a single Sikh’ 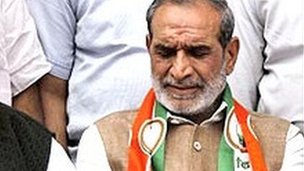 In his final arguments, CBI prosecutor RS Cheema told the court that the riots [Genocide] which targeted a particular community were “backed by both the Congress government and police”.

“There was a conspiracy of terrifying proportion with the complicity of police and patronage of local MP Sajjan Kumar,” the prosecutor told Judge JR Aryan, who will eventually pass judgement in the case.

Mr Cheema said that witnesses at the scene heard Sajjan Kumar tell a crowd that “not a single Sikh should survive”.

Sajjan Kumar and five others on trial with him deny charges of being involved in the killing of six people at Delhi Cantonment – or military area – during riots that were sparked by the killing of Indira Gandhi by her Sikh bodyguards.

The trial began after a government inquiry found “credible evidence” that some Congress party leaders incited crowds to attack Sikhs during the riots and that they were not spontaneous.

Warning: array_slice() expects parameter 1 to be array, object given in /homepages/8/d257815124/htdocs/sikhactivist/newsite/wp-content/themes/Backstreet/panel/widgets/tweets-widget.php on line 40

Warning: Invalid argument supplied for foreach() in /homepages/8/d257815124/htdocs/sikhactivist/newsite/wp-content/themes/Backstreet/panel/widgets/tweets-widget.php on line 42

Sisters in Solidarity: HerStory is Ours

Setback in US summons to Badal; SFJ pledges to remain persistent and resilient

Sewak Singh » I would like to challenge this repetitive notion of estranging...